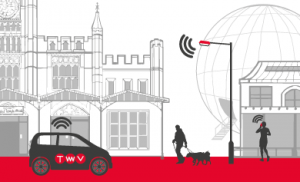 SDx and The Software Defined City

Chris Gabriel looks at how a UK city is deploying SDN to create a technology-agnostic citywide network that will allow driverless car experiments, traffic and environmental sensor networks, and smart energy grid management.

Since we started talking about Software Defined things, we have moved, along with the rest of the IT industry, from using the narrow term SDN to the broader SDx. This has allowed us to use one acronym to encompass software-defined networking, data centres, storage, server and any yet to be developed technologies that are all software-defined.

What we didn’t anticipate in 2013, when we described SDN for the non-technical CXO, was 24 months later we would be describing the Software Defined City.

Last month “Bristol is Open” was announced. A joint venture between the City Council and the University of Bristol, it is an ambitious research project to create a citywide, fully programmable data network.

April will see the launch of a functional testbed on which best practices for connectivity in the age of the Internet of Things can be modelled.

In comments to SDxCentral, Bristol Is Open CTO and Managing Director, Dimitra Simeonidou said, “We want to go beyond ‘smart’ to an open, programmable city with an infrastructure that could be directly programed and customised.

“One of the very first requirements was that it had to be SDN-controlled, because we wanted network infrastructure that would be fundamentally technology-agnostic, and that could withstand many technology generations and a lot of heterogeneity.”

A chief feature of the network, which my colleague Fabio Hashimoto demonstrated at Futurecom in 2013, is the ability to segment bandwidth and provide a guaranteed allocation to dedicated users. This capability will be useful to early adopters in Bristol, including the BBC. With a large presence in the city the broadcaster will be guaranteed high-bandwidth access.

If your inner geek is itching to get over to Bristol and get involved, you’re not alone. It has been stressed that this is an open model from which other cities can learn - already the Chinese city of Guangzhou is planning to get involved.

My colleague Ian Cook said of the Internet of things: The question is not really ‘Is this even possible?’  It is ‘What value can we derive from engaging with it?’, followed by ‘How do we do it?’

I think it it’s time for CIO and CTOs to ask the same questions of SDx.