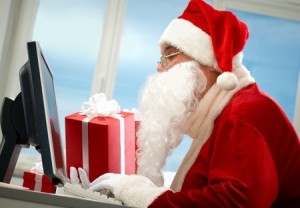 In the run up to Christmas, Chris Gabriel, CTO Logicalis UK, addresses how technology proves beyond doubt that Santa Claus exists and is increasing productivity due to technological innovation.

It is incumbent upon us all, especially in the IT industry to answer the big questions in life.

And while during the year we all do our best to resolve some of the great challenges facing the world, and we dutifully describe how we can improve the lives of citizens, students, patients, travellers, and shoppers in all manner of innovative ways, at some point we have to extend our thoughts to one of the most substantial questions facing our species. Is Santa Claus real?

Now, as all adults already know, Santa Claus without question exists, and I know I don’t need to provide any proof of his existence to the intelligent adult readers this blog always attracts.  However, infant minds are more enquiring when it comes to the great man’s back-story, and sometimes require a little hard evidence.  They get the presents bit, but the scale of the supply chain challenge and logistical complexities cause their still forming minds to doubt the credibility of the great bearded one’s role in this most special of days.

It is our duty as parents, uncles, aunties, or grandparents, but most importantly as members of the technology community, to fill in the gaps…let me tell you how I do that with my daughters.

“No way can he find out what every child wants in the world.”

Now come on girls, haven’t you seen all the headlines in the newspapers over the past year about how every piece of information in the world is being collected by the NSA (my girls love a good conspiracy)?  Santa simply taps into the fibre optic cables of the Internet and reads every email ever sent and every web site you have ever been on to build an accurate picture of everything you have every said or thought. In the old days children used to have to send him a letter (just make sure you can explain the concept of sitting down and writing to somebody using a pen before entering this archaic territory) - it worked then but it was very slow. Trawling the world’s internet traffic means Santa can use Big Data to remove the hassle.  He knows everything; trust me.

“Yeah, ok, but how does he know where we live.”

I simply get them to click on Google street map, and type in our post code to see how easy it is to find out.  “Doesn’t prove we live there daddy.”  So I just get them onto one of the many sites their mother posts their pictures on, with Privacy, Location Settings turned to ON, and explain that everybody in the world knows where we live, and if Santa simply tags their meta data with the geo-location information from the masses of social media posts they are included in, then it’s not really rocket science is it?

“Well, ok Dad, we can see all of that, but NO WAY he can make presents for everybody in the world.”

Oh little ones, how innocent to the explosion of 3D printing you are.  So I sit them down and explain that given we all know that big problems create big technology innovation, don’t you think the man who has to produce a few billion presents every year might have had a hand in the technology that allows virtually anything to be created from a fancy toner cartridge?  We are starting to discuss whether, one day, he will magically just send the design to the Santa Claus 3000 4D printer in our home to cut through the supply chain entirely.  They love the idea, but are starting to think about career options that don’t involve anything to do with product manufacturing, distribution, or retailing.

“Well, we are convinced that he does know what we are thinking, he does know where we live, and he can make toys for every girl and boy in the whole world, and one day the gifts will be magically printed in our homes, but today, there is NO way he can deliver them all in one night.  Got you Dad!”

Always been a tricky on this.  I was hoping the people at CERN would have detected the potential for time travel by now. The whole world stands still as Santa enters a space-time vortex where time slows, allowing him to deliver the presents over nearly a year in his time, and 12 hours in normal time.  However, those supposed scientists let me down badly; but that’s big science for you.  Anyway, all solved.

Just think Amazon Drone girls.  Santa has been at the cutting edge of drone technology for decades I tell them.  Actually, Project Rudolph was only leaked out of area 51 in the 1950s when one of his early prototypes crashed in the desert trying to deliver a DVD box set (also invented but not yet released to the public) onto the roof of a house in Nevada.  Ever since it’s been hush-hush, apart from the elaborate song the US government invented to cover the other failed projects; Dasher, Dancer, Prancer, Vixen, Comet, Cupid , Donner, and Blitzen.

I always tell this story on Christmas Eve, just before they go to bed.

“But Dad, so all of this is possible now, but how did he do it when you were our age and the Internet, iPads, MineCraft, XBOXs, Wi-Fi and possibly even electricity hadn’t even been invented?”

I just look through the window into the night sky and, seeing Santa on his sleigh with his reindeer pulling his sled, have a little chuckle to myself.  We all think technology has or will solve every problem humans can throw at it.  But as we all know, technology doesn’t solve everything.

The thing that really does solve the big problems is the imagination to put technology to good use and for the benefit of all.

Have a very merry Christmas.