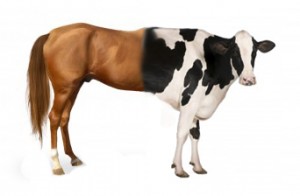 Big Data or Accurate Data – Horse in, Beef out…

Chris Gabriel points out that the impact of the European horsemeat scandal isn’t limited to every related piece of digital information in computer systems across Europe being wrong.  But that every other piece of data relating to that incorrect data is now also either wrong, or misinterpreted.

Big Data or Accurate Data? Horse in, Cow out.

According to some, we are in the time of big data. In the UK last week on Radio 4, the BBC’s preeminent talk radio station, hosted a one hour debate on the future of big data, and how everything on the planet would produce ever more massive amounts of data, to be collected, parsed, and analysed by humans or more likely machines.

In the very near future machines would create, collect and take decisions on data in a highly intelligent closed loop system.  Some contributors looked to the benefits, and some warned of a dangerous future where everything we do would be stored and ultimately used against us.

When, in 1949, George Orwell penned his dystopian view of the future, 1984, he envisaged a future where Big Brother would be an all seeing, all knowing leader.  Big Brother was described in the novel as a real individual, but was more likely an artificial state construct designed to keep the people under constant surveillance.

While CCTV cameras do now seem to follow our every move, could Orwell have better described the world we live in today as Big Data?

Sometimes I fall into a dystopian mood and cannot help but look up and around, with the feeling I am being watched.  That every email I send is being collected and deconstructed by some all-seeing power.  Every time I swipe my credit card I see the bits and bytes of the transaction being re-routed to a secret data bunker where my choices on the high street are informing some higher power as to my personal preferences.

I don’t even want to imagine what internet service providers and purveyors of seemingly helpful search engines think about me.  They must imagine me chained to the sofa all evening watching children’s TV (that’s my daughter, not me), while simultaneously researching local property prices.

And then, when this digital disaster plays out in my mind, I satisfy myself that for the last few months when I and my children sat down to dine on mass produced ready meals or burgers, the key ingredient, described simply as ‘beef’ was actually something rather more horsey – even though the origins of the ‘beef’ are imprinted on the pack label, ingredients list, bar code, supply chain tracking code, health certification forms, and all the other digital imprints of identify stamped into every computer system making up a highly sophisticated supply chain.

If you have watched the international news, you will now realise that Europe has been engulfed by an ‘is it beef or is it horse’ scandal that means many consumers have been switch mis-sold a key ingredient in their burgers or lasagne without being told.

While I should be horrified that instead of consuming an animal that has lived its life ambling hopefully in some grassy field, I have been barbequing something more at home on the race track, I do have to smile about the protestations of those who say we already live in a society of not simply big data, but smart data.

You see, the impact of beef being horse isn’t simply that every related piece of digital information in computer systems across Europe is wrong.  But that every other piece of data relating to that incorrect data is now also either wrong, or misinterpreted.

What about all the taste test data showing that lasagne from brand X is better than from brand Y?  Well, if lasagne X was horse and lasagne Y was beef then perhaps we all like a ‘faster’ version of fast food than we realised?  And now the manufacturers are analysing consumer choice data and varying ingredients when one of the key ingredients was not what they believed it to be?  Will our real beef lasagne taste as good?  Did 9 out of 10 consumers really prefer something completely different?

What about any data on health studies? Is eating a daily portion of lasagne containing beef rather than horse not as healthy for us as we thought? I don’t know, but now neither do any researches who assumed that the data they were analysing was that of beef and not horse?

You see, while the European scandal of the food supply chain is worrying, it is not the health grounds that cause me concern - horse is a widely eaten meat around the continent and parts of the world - it is that the data being used across the supply chain is wrong, and that the extrapolations and interpretations based on that data, across the entire end to end supply chain are also now called into question in a big way.

There was lots of data being created, collected, parsed and analysed.  But it was data for a beef based product, not a horse based one.

And perhaps this is something the world of big data needs to learn from immediately.

It is not the size of data you have, but its accuracy and relevance.

If your sales force inputs inaccurate data into your CRM system, then all the big data analysis in the world will not give you a clearer and smarter picture of the customer.

If a retailer collects what it thinks it needed to know to drive back end efficiency, rather than what it needs to know to sell to more your effectively, then it has big data for big data’s sake.

And, if government, never seems able to recollect your data dots, never mind connect those dots together into a coherent picture of your government service needs, we won’t have smarter government, we will have governments frozen in the headlights of the on-coming data juggernaut.

So, if you are somewhere in the warmer climes of the world this weekend and you're having a barbecue, look at the label on the front of your burgers and smile.  Somewhere in the world, there is a researcher manipulating a massive database of consumer satisfaction taste tests.

Where that data comes from is as uncertain as the primary ingredient in your burger.

In the future, a lot of work is going to have to be done to ensure the data we are collecting and analysing does match up to its real world counterparts.  It’s something we might take for granted, but, when decisions are being made on the growing digital data universe, data integrity standards are going to have to something taken seriously by all of us in the future.

Although as we have always said; “rubbish in, rubbish out.”